Well, a Reddit group has popped up in reverence of the great author Hugh Cook, so I thought it was time to type up an old (and perhaps somewhat embarrassing) email I exchanged with him back in 2003, just months before he discovered he had cancer, I believe.

Here it is, starting with his reply to me, then my initial email to him.  I never wrote back again, not wanting to take up his time, but I kinda wish I'd continued the conversation a bit.  Oh well!

And to be clear, I still stand by a lot of my hopes about computers games, and having better worlds and characters, etc.  And my ideas now and probably just as naive as they were then.  Haha.

Many thanks for your e-mail.

How long did it take to complete the W/W series? Well, the conception was probably in about 1980 or thereabouts, and the last two books were actually written in 1990, although not published until 1992. So, ten years all up. When I was working at full steam, I was turning out two books a year.

Other books? That’s a tough one. When people ask me what I’m reading or what I would recommend, I never have a good answer. I tend to read whatever comes to hand. Now that I’m in Japan, in fact, I typically end up reading whatever books happen to have been discarded by teachers working for my company … reading these totally indiscriminately. I’ve never in my life been a selective reader.

I had mixed feelings about the LORD OF THE RINGS film, which is the only one I have seen so far. Technically it was very impressive, but I found it depressingly violent.

What is the print-on-demand publishing method? Well, in traditional publishing, a bit printing machine starts, prints out a bunch of books, then stops. Those books then live in a warehouse, eating electricity (someone has to care for them, which costs money) until all are sold. Then, if demand permits, another bunch is printed.

With print-on-demand, however, no stock of printed books exists. The reader orders from a source such as amazon.com. The order goes to a machine which prints and binds exactly as many copies as needed, on the spot. The leader in this field is a company called iUniverse.

The upside of this method is that it is very cheap to get started. Typically the author takes on the financial risks of publication, but, assuming the author has the technical skills required to produce the computer files which will be used to produce the printed book, the financial costs to get started can be kept below two hundred dollars (American).

The downside is that books do not get any bookshop exposure, so the author really needs some method to generate publicity … a publicity tour or a good website or whatever.

Well … thanks again for the e-mail. This is going to have to be all for me – gotta go to work!

I have wanted to write to you for a long time (I actually have a draft of a letter at home in a folder somewhere). :-) But I have just found your address, so here goes!

I especially wanted to say how much I enjoyed your whole W&W series, especially Book 4, “The Walrus and the Warwolf”. I also loved Books 6 & 7 with the whole element of the Editors chiming in and arguing over the text.  Haaha. But I loved every book. The whole series turned the fantasy genre on it’s head in a way, which I just loved, and I can’t really be bothered reading fantasy books anymore. They seem to tame and contrived compared to the surprising events in your books.

And I liked the way you did not make judgement calls most of the time. You just told the story from the different perspectives of the people involved, many of whom you could identify with, despite the fact that their interests may have conflicted. Despite only being 24 now, I hope I still have the books for my kids to read one day! :-P

I’ll always remember the day when my twin brother Evan bought The Wordsmith and the Warguild when we were at the airport in Melbourne, heading somewhere or rather on a family holiday. We always used to be able to buy one book each at the airport. :-) Anyway, we often sat about reading our books while on holidays, and upon arriving at our destination, I remember Evan looking up from the book every now and again and revealing the latest strange situations in the book. It quite frightened me just hearing it from him.

I remember him describing the boy Togura climbing a tower, trying to escape a dragon-like snake thing grabbing at him, following his blood. It was years before I began to read the books myself, and I loved the way that you could read them out of order, like a series of different histories by different authors telling inter-related stories.

The Wicked and the Witless was another favorite due to the comedic elements.

To this day I still have no idea why the series was not more successful. I never see the books anymore even though I check every few months to see if any of them have re-appeared in bookstores around Melbourne. Perhaps it was just that the 2nd and 3rd books were perhaps some of the more difficult to read. I actually read those books after book 4, then book 1, co-incidentally, so I was completely sold on them straight away.

In fact one of my favorite paragraphs from the books was from book 2 where Togura and his girlfriend are dancing at her father’s banquet. Like so many other times while reading the books, I felt that the moment was living in my hands. I think it is your ability to let the style go wherever it wants, rather than limiting yourself to the often narrow style of the fantasy genre.

I had a few questions which you can answer if you’d like (or just the ones you’re interested in). [Oh, I had more questions, but upon finding your personal webpage now, many have been answered! – Murray Lorden, Editor Major]

I was going to ask whether you were writing any more fantasy works, and I have found some Oolong Morblock. :-) It is exciting to hear of your plans with the series (although I can’t believe you were planning for 20 years into the future! How long did it take you to create the W&W series, from conception to completion?

Oooh! I’ve just found the Secret History of Lord Dreldragon! That’s sure to be good value! :-)

Would you have any recommendations of your other books I could look for that you think I might enjoy? The Shift sounds like good value. I guess I’ll have to wait until I got to New Zealand one day, and look in the libraries. ;-)

I’m not sure whether you have any interest in  computer games, but I thought I’d ask! Do you, or have you ever played computer games? Are you interested in the future of the medium?

Having not read the Oolong Morblock stories yet, I’m not sure, but would such a world lend itself to a computer game of some sort, possibly? It is my opinion that computer games simplify the world in which they are set so that they can be understood by the player. This really limits the sorts of things you can do in a computer game, and I can see how an attempt to set a computer game in a world such as the W&W world could fail (or simply turn out blandly, where the world itself is a bit irrelevant, and all you do is run around beating things up), but it would be a real challenge to try.

I hope that in the future, character interactions will increase in subtlety, where the attitudes of the characters you meet will change depending on your reputation as a player. Also, a friend and I have been discussing an idea for a game system, whereby the major (unalterable) events of the land are set to occur at certain times whether the player is there or not to witness them.

For example, in the case of a siege on a castle, the player may be there in the thick of the battle, laying siege with the attacking forces, or they may be on the defending team if they have aligned themselves with the town within the castle, or they may alternately be on the other side of the world, caught up in other events.

The story in such a game is whatever the player makes of it (this kind of reminds me of your W&W series, where characters cross paths, playing parts on different sides of each major event, and at other times are hundreds of leagues away).

The reason I ask is not so much due to have any actual say in what games my company works on, but for the future. I am currently an Assistant Designer, Assistant Producer and Quality Assurance Manager (a bit of an odd jobs man). But I’d like to work up to being a Lead Designer at some point (or at least to lead the design group on a project that I am responsible for). Even perhaps in the context of working for my own company with the aforementioned friend. And I have been interested for a long time to gauge your interest in such a project.

I’m not sure exactly what such a collaboration would involve. I guess it would involve working with you to create an overall story arc, characters, events, and working to write all the dialog. But without knowing whether you are a fan of computer games, or whether you find the potential of the medium to be interesting, it is hard to really talk about it.  If you could give me some general indication of your feelings, I’d be interested to hear, even if it is a simple, “Not really interested.”

Well, that’s the main question out of the way. Other than that… a few assorted questions…

Have you seen the Lord of the Rings films? What do you think of them in regards to their telling of such a classic fantasy tale, and their being shot in New Zealand? I just came across your comments about the question “Is Tolkien war propaganda?” Interesting. I guess I’d never questioned the killing of the Orcs, mainly because the Orcs seem to be the invading force, and hence killing them in self defense, perhaps…  I mainly love the films because I already really liked Peter Jackson for his earlier films, Bad Taste, Brain Dead, Meet the Feebles, etc, because they are so ridiculous. And I think he has done a great job of the first two LOTR films so far.

How long did you live in New Zealand? Do you think that living in New Zealand played much of a part in your inspiration in the writing of the W&W series?

And I have to ask, what is the print-on-demand publishing method? 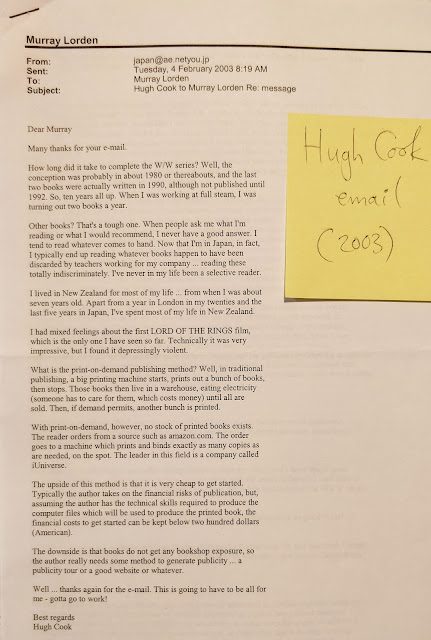