I've seen Luke Muscat from Halfbrick speak before at Freeplay 2011, and that presentation about the development of Fruit Ninja was really informative, full of decisive insights about game design itself and about the sort of audience he was trying to capture, so I was excited to see him again at GCAP 2012.  Here are my notes...

"Design Fundamentals: Communication from your Game to your Player" with Luke Muscat from Halfbrick

Don't just have all your perks available at once, and order them on a list from worst to best, cheapest to most expensive.

Mix them up into different categories, lock some away, encourage the player to experiment, to try different ones, to earn them.

You want the player to engage with the system for longer, to enjoy the variety, not just one of them.  Don't bore them or frustrate them with the upgrades and perks.

Each new perk should be a fresh new thing to play with, and offer something a little different.

When a pilot is landing an aircraft amongst chaos, there's too much input... radio chatter, a variety of interface stimulation, their own thoughts, all combine to be very distracting...  Pilots can become saturated with information, and almost black out, out of control and unable to act cohesively.

Keep your interface organised, and as simplified as possible, have a consistency to its functionality and pacing.  Only give the player information that they need at the time, and put effort into spacing out the information.  Never be sloppy about how the interface works!

Bad Piggies is great at stripping out every bit of information that's not needed.  There's almost nothing on screen!  Very very minimal.  This is especially important when trying to communicate to a very young audience, and to audiences across languages.

FTL has an incredibly complex HUD, but it suits the game because it's meant to be chaotic, and you can pause the game and make decisions.

Surfing Game
Sometimes it is good to obscure or abstract information.
Doing this can actually enhance the engagement of the player.

If you just give a list of points for Distance, Barrel and Style, it feels a bit scientific and inappropriate for the theme of the game.  And giving big numbers like 10,000, 140,000, 25,000 starts to feel as if it lacks context, it doesn't mean much to the player.

For a surfing game for instance, you could abstracted the scoring system to be a pacel of 3 judges who each give a score out of 10, like in a surfing competition.  The judges are named Distance Dan, Barrel Barry, and Critical Chris, whose scores now feel contextualised through characters, and give a sense of what each judge cares about.  This keeps it a bit more open and obscured, and the player knows the context of what their total score of 10 means, and they have a sense of how to improve their score on the next attempt.

Giving your scoring system the right sort of theme and metaphor can really help add character to your game, which engages the player in your world, and also provides extra feedback to them about how they can progress and improve.

Jetpack Joyride - Goals
Halfbrick introduce the goals in a casual way as the game plays out.  The goals system is not forced on the player.

The first three goals are just activities that the player will inevitably achieve anyway, simply by playing the game normally.  They are not even told the goals exist.  But as you inadvertently start to complete those goals, you are notified of your achievement and reward!  So it's a nice soft way to introduce goals to the player, and draw them in once they've been playing for a little while already.

The first goals in Jetpack Joyride are:

Get your strings right!
Really refine your strings!  They have to go through a lot of iterations to get them right.  They look easy to write, but you need to test them against a range of users, and iron out any confusion while keeping them as succinct as possible.

A string can easily go through 10 iterations before you nail it.

The devil is in the details.  It's easy to just knock out a string, but it makes a HUGE difference to get those strings just right!

It really is just all about EMPATHY.
What is the most effective way to communicate with the player?
How do you make them understand you game, and make them care?

I'm just getting into the User Interface for my new game, so this got me thinking about how to keep things streamlined, while still having all the relevant info on screen.

And it helped me collect my ideas about how to present In App Purchases, and how to make it clear and easy for players to browse things they might want, to make their decisions interesting and fun.

As I keep working through these parts of my game, I'm going to be going back through these notes to tweak my ideas.  Great stuff!

Posted by Murray Lorden at 11:37 PM No comments:

Game Connect Asia Pacific 2012 has just wrapped up.  I had a great time there, and I wanted to share some of my favorite sessions here.  I hope you find them inspiring and useful!

As an older gamer myself, I feel tired of the majority of mainstream games.  I don't really have the time to plough through a 20 hour killing spree, and although I'm sure I could get into the high-quality games like Crysis 2, Far Cry 2, Fallout 3, Dragon Age, etc, I just don't feel compelled to dedicate my time to that endeavour.  I have a sense of being time poor, of needing to strive to make my own games, and these days I'm hungry for different sort of experience.

So it takes a more unusual game to get my attention these days, and a game like Journey really captures my attention.  Robin's games come from a fresh perspective.  She's interested in themes and emotions outside of the normal game genres, outside of the normal power fantasies, and that resonates with me.  She talks about game development in terms of creating art, of exploring a medium that is rich with possibilities, a games that stem from a creator's passions and values.


My notes from "Keynote with Robin Hunicke"


Work on a game that you're passionate about, that you must make, that will have an impact not just on the market, but on people, on culture.

Don't work on games that just aren't worth it.  You can spend years on a single game.  Life's short.  Make sure you care about what you're doing, or you'll look up one day and realise you've spent years working on games you just don't care about.

Find an idea you care about.

If you do something original, no one knows ahead of time what the game will look like and feel like, so concept it like crazy.
There's no one specific way to make a game.
Let your ideas loose, start from the place that works for you personally.
Start with the music.  Start with the art.  Whichever part works for you.
Don't rush it, don't force it, let yourself fall in love with the idea.

Iterating in development is not a waste of time.  You need to build things and try them, and you will need to throw things away. 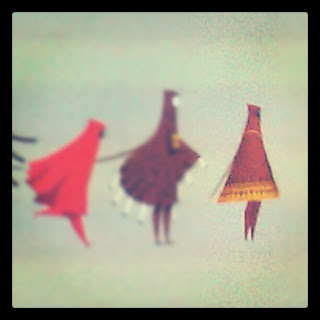 Devote yourself to the process of user testing.
Even though it can be hard, you need to go through the shame and the pain, and you will learn from it.  Resist being critical of the players who test your game.  If they don't understand something, it's not because they're bad players.  It means you could improve how your game works, so they get it.

Also, seeing things fail in user testing makes it much easier to throw things away that you were otherwise attached to.

We are not optimised as humans to throw things away.  We horde things, and we want to do things perfectly and efficiently.  But games are about refinement and optimisation.  You need to optimise what the player ends up experiencing.  Hide all of the mistakes, and unnecessary elements that they don't need to see.  You want them to end up with only the best, most streamlined version of your game.

Find the feeling in your idea.

Focus on the feeling, and prototype like crazy.
Get at that thing, work it.

It's not that complicated to do something amazing, it's mostly dedication and practice.  It takes time and effort.

As you go along, you throw away less things, but you still throw away at the end.  Don't expect to not throw things away.

You can feel very uncertain in the middle, and towards the end, and the effort must ramp up to match this uncertainty.  Uncertainty can be caused by things that "just dont work", that you thought would work, for example.  There are many unknowns in game development.  And you need to overcome these uncertainties with effort and iteration, until things finally work!  It can take more time and effort to overcome these uncertainties than expected, hence the additional exertion.

You should feel like making games is fun - the best job in the universe.

If you don't feel that, then maybe you're doing the wrong thing, or doing it in the wrong way.

During question time, Robin said she'd love to see a big world beautiful game that wasn't about fighting, it was just about exploring.  (I agree!)

This presentation reminded me that I miss working with other people.

It's hard to "jam out" ideas on your own. It's hard to make quick iterative progress by simply throwing ideas at each other, improving ideas rapidly and drastically in a single conversation.

I resolved to show my games to people more often, to get more feedback from a wider variety of people, and to catch up with game developers more often, tell them my latest ideas and hear their ideas for improvements, as well as their criticisms.

Between sessions at GCAP, I chatted to some friends about my new project ideas, and often someone would throw a fantastic idea at me straight off the cuff. Even a quick idea can suddenly shine a whole new light on my concept, on the setting, on who the main character is. It's big issues, not just little details, that can be greatly improved just by a quick conversation!

Posted by Murray Lorden at 7:43 PM No comments: