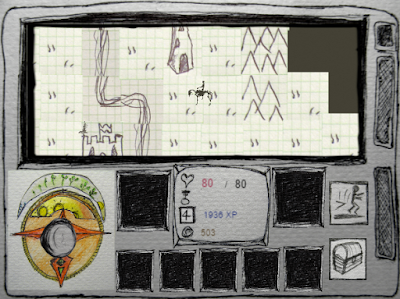 Epic Quest was the first game I started trying to make on my own in Game Salad, in 2011.

Everyone clearly says, "Don't make an RPG!", so I thought, this'll be a good idea, and went straight to it!  Surprisingly, I ran into all sorts of problems and gave up!  But I learned a bunch of stuff doing it.

My Goals with the Game
Features

Lessons Learned...
I took these lessons and later started building a tile-based RPG world, reading it's data from a separate table, and using a small set of tiles to show the current surrounding area.

Hopefully that game will be released into to the world for realz some time!

Posted by Murray Lorden at 11:51 AM No comments:

Ancient Art of War was a really excellent game!  And in my opinion, perhaps the first "real time strategy" game, despite others being sited as the first.  This was 1984!  It was created by Dave Murry and Barry Murry. 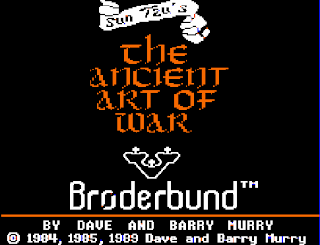 AAoW was also one of the games most responsible for drawing me into game development because it shipped with an excellent level editor! I spent hours constructing my own maps using the provided tileset, and you could write your own intro story, and set some of the game rules as well. 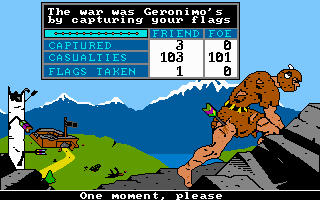 I played the old CGA version... 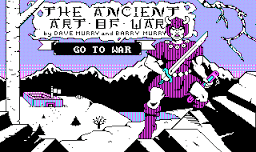 The gameplay itself involved selecting units and giving movement orders around the map... 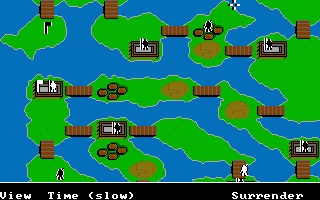 It wasn't until years later (around 2005) that I realised the same Murry family (now also joined by Dee Dee Murry) was behind another of my favorite, and most influential games, Manhunter: New York (1988) and Manhunter: San Francisco (1989) for Sierra! 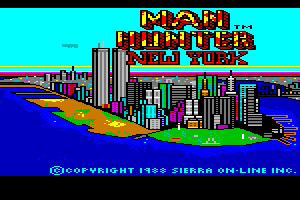 The Manhunter games were these fantastic sci-fi adventure games, with a really brooding mood and dark story, depicting a dystopian future where Earth had been overrun by Orbs from outer space! 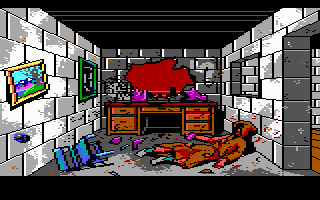 There were some cool sections of gameplay where you would track suspects in a Google Maps like device called the MAD! 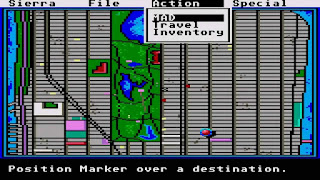 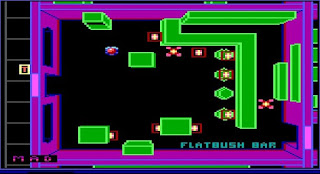 The beauty of the game comes from everything being depicted in quite an everyday way where the domination of the Orbs has become mundane and accepted.

You play as a Manhunter, a worker for the Orbs, tracking down those who seek to overthrow the Orbs.

The game featured great ghoulish art depicting the brown robed Manhunters, and a variety of scenes of gruesomely murdered victims and cadavers. 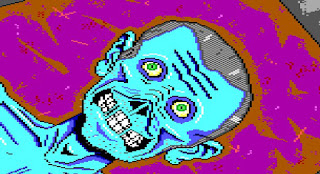 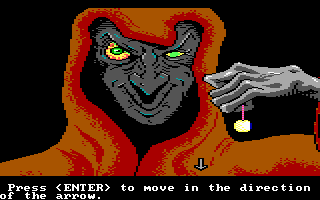 Thanks to the Murrys for this unique and evocative chapter in the history of adventure games! 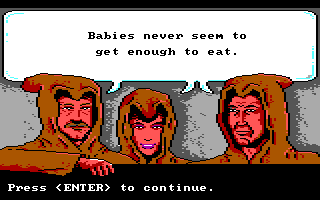 I'm still waiting for the final title in the series, Manhunter: London.  :)

And another for Manhunter: San Francisco...


And a bit more of Manhunter: New York in action...


Posted by Murray Lorden at 7:43 PM No comments:

Here's a presentation by Doug Church (Looking Glass, Valve) from about 2003, about designing Object Systems for games.

I've reformatted it a bit to make it easier to read, and included it here because I love the Thief games, and thought others might be interested in it too.

It is written (I assume) with an eye towards immersive sims, and other games where you want rich interactions and emergent gameplay possibilities.

Here's the Google Slides, and here's a PDF.

I wish I had an audio recording of the presentation, but I don't think any such thing exists.


PS: Here's a little preview of a few of the slides from the presentation... 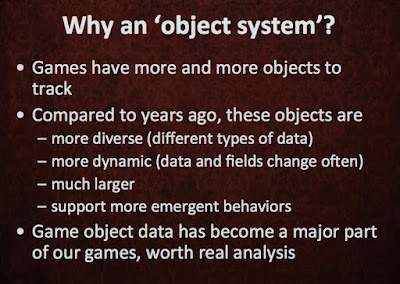 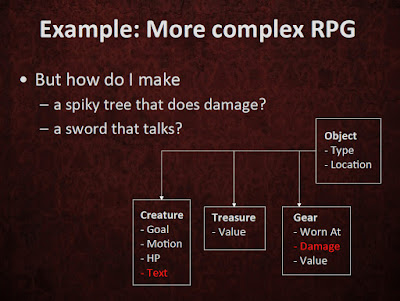 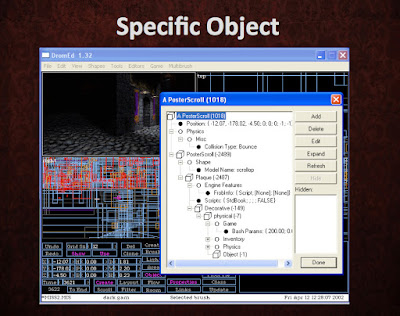 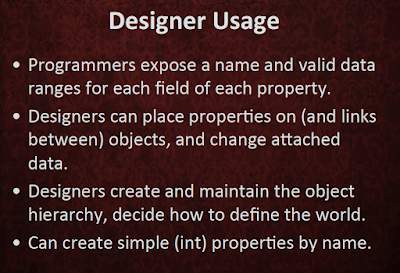 Posted by Murray Lorden at 7:31 PM No comments:

You can download my maps for Quake and Quake 2 here (5mb).
They're rough around the edges, but I hope you enjoy them.  :)


The first map I made for Quake was "Bones".

At the time I was more focussed on playing music in a band than playing computer games. But one day, we turned up for our usual band rehearsal at our drummer's house, and he had Quake set up, networked across two computers!

It blew my mind.  Full 3D, realtime, incredible sound and lighting.  We started playing deathmatch with 2 or 3 computers at a time, and I loved the single player just as much! Quake drew me  straight back into the world of computer games.

Later, I found Virtus Deathmatch Maker at a local computer store in Eastland, Ringwood. I think it was a Dick Smith. I was thrilled to see this program would let me make my own maps!  I'd made my own maps for simple things as a kid, like Ancient Art of War...  but never anything in 3D!  It was a a lot to learn, but it pulled me straight in.


My second map was called "Myltek".

I still wasn't super good at making a visually rich or coherent world, but I enjoyed making the gameplay spaces, implementing game logic and challenging situations, and testing them over and over, tweaking things.

Later I got Virtus Deathmatch Maker 2 so I could make Quake 2 levels.

I got a bit more carried away with these levels, bringing in some custom ambient sounds, and making environments that were a bit more themed (although still a bit rampant as well).

This is two missions, that joined together.  There isn't really an ending to it all!  But it's a fun journey.


I call it "Drunken Goons & the Underground Operation".

It wasn't until a few years later, around 2000, that I built a more coherent, fully realised environment and mission for Thief 2, called "Lady Lomat's Flute".

I first released that mission in 2001, and then revisited it again about 10 years later, adding a lot more polish, and a complete intro movie voiced and illustrated by Brendan Barnett.

Posted by Murray Lorden at 10:34 PM No comments:

Adventures in GW Basic: The Podigan

When I was a kid, our family got an IBM Compatible PC.

It introduced me to Digger, Alley Cat and King's Quest...
...but importantly, we also got GW Basic!

The video below shows my GW Basic exploits, including a bit of graphics drawing, a maths program, and the biggest thing I ever wrote...  PODIGAN!

Podigan was an infamously unfinished sci-fi space-fantasy text adventure, inspired by the likes of Space Quest, King's Quest and Transylvania...

Check it out in this video!


Here's a screenshot of PODIGAN in action! 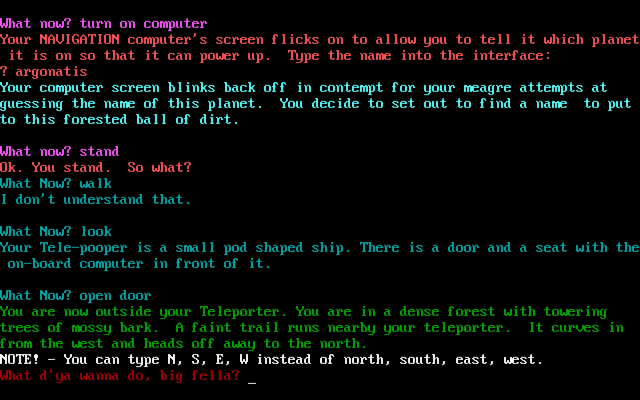 I remember sitting up in our old pine walled computer room, on the PC.

The whole thing was just made up of a few simple variables and tons of GOTO commands. ie:

I craved to be able to do more advanced programming, to make games like the ones I was playing...  King's Quest and Digger.

I had no proper idea of what GW Basic was fully capable of, or how to do anything with functions or classes, or anything that might have the appearance of object oriented programming!

I knew I really needed to write SYSTEMS that could repeat themselves, and iterate over data.  But all I could figure out was to write IF THIS, THEN GOTO sort of statements.  :)

I would have to say that writing this was a pretty clear sign that I really wanted to make computer games.  It was very time consuming, and required lots of testing and iterating. And I enjoyed those things!

I tried to imbue the story with humour, even in the way the silly PC Speaker soundtrack was composed.

The game was never finished (surprise!).  You can play through the first section of the game, and then it suddenly ends.  You know the deal.

You can download my GWBasic folio here.  The ZIP includes DosBox, GWBasic, and a handful of my GWBasic projects, including a Menu that lets you load up each one.

But frankly, it's much easier to just watch the video above!  Enjoy.

Posted by Murray Lorden at 5:13 PM No comments: